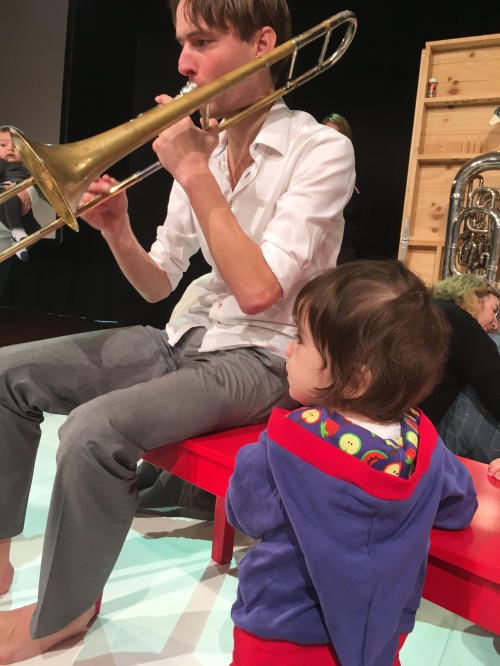 Imagine is an annual children’s arts festival at Southbank Centre. It’s usually held during February half term. Last year it completely passed me by so this year I was determined to get along.

The festival programme included both free and ticketed events and loads of cool things such as an animated adaptation of Roald Dahl’s Revolting Rhymes and a special Screaming with Laughter show with the Scummy Mummies. Unfortunately, Screaming is for babies under one year and Revolting was for older kids. I choose to book a musical performance for under 5’s called Whoosh! and planned to stick around after for a free performance by Mil’s Trills, a New York group promising interactive songs for littles.

Pea was in a grumpy mood, for why I don’t recall. Let’s blame teeth, it’s almost always teeth. Before the show even began he’d already had a mini tantrum involving whacking his head on the floor so things weren’t looking promising. After removing our shoes, we were then led in to the performance in the Clore Ballroom. Seating was arranged in a semi-circle and dark curtains were used to block off the ballroom and create a smaller performance space. I sat in the second row with Pea on my lap but our view was a little bit obscured by the people in front.

Whoosh! is a wordless performance based all around breath and air. It’s performed by a trio of musicians who deployed a variety of instruments throughout. The performance began without instrumentation, just gentle movement and breath work. It built to incorporate instruments such as flutes and tubas and a whole bunch of things I couldn’t name. The movements became more elaborate and sometimes comedic as the show progressed. At the conclusion, the children were encouraged to get up on stage and interact with the musicians and the instruments.

I thought the three performers were excellent throughout and was particularly impressed with the way they engaged with the children at the end. Whoosh! is a beautiful show that should have been relaxing for the adults and engrossing for the kids.  However, I felt that the choice of venue worked against the content. Although efforts were made to block off the Clore ballroom, nothing could be done to mask the background noise from the Central bar and foyer. The whole place was heaving with children and their adults so it was really very noisy. I found it hard to concentrate on what was happening, and it was apparent that the children in the audience were getting quite fidgety at times. Despite being out of sorts, Pea was fairly engaged with most of the show but certainly restless at times. It’s is a lovely show I didn’t feel we got value for money on this occasion.

We had a bit of time to kill in between Whoosh! and Mills Trills so we went to the Riverside Cafe for a reviving coffee (me) and a pot of blended goop (Pea). Again, the cafe was extremely busy and loud and Pea drew the unwanted attention of a little girl who was hellbent on poking him in the face and stealing his snacks. I think her mother was having as miserable a time as I was.

With still a bit of time to kill until Mill’s Trills, we ventured up to the quieter levels and Pea was content climbing up and down stairs, waving and giggling at anyone who walked by.  I think this was the happiest he was all day.

We headed back downstairs to the central bar for Mill’s Trills. We got there a good 15 minutes before the start time and there wasn’t a single available seat or even much free floor space. It was loud, hot and chaotic and I probably should have just cut my losses at this point. I wedged us into a tiny patch of floor space for a limited view of proceedings. I developed a sore arse almost immediately.

Mills Trills got started and pretty much delivered what the brochure described –  lively and interactive singing and banter to the accompaniment of an electric ukelele. Again, no discredit to the performers here but we just weren’t feeling it. Pea couldn’t really engage with the music as he wasn’t close enough to the action and I was feeling drained of all energy and struggling to muster up enthusiasm. He got really fidgety then grumpy so after about 10 minutes I felt it best to just get out of there. After a brief struggle to find our buggy amongst the sea of other baby transportation units we left and Pea soon fell asleep for what turned out to be a two-hour nap.

On a whim, I thought I’d take advantage of the sleeping baby and have a sit-down lunch in a proper restaurant. I went to The Green Room, just behind the National Theatre, and a place I first went to on a date with Daddy Pea. The lunchtime rush was fizzling out when I arrived and the staff were friendly and accommodating. I sat there and ate cauliflower tacos, followed by apple pie and washed it all down with a crisp white wine and Pea slept the whole time and it was lovely. Emboldened, I polished it off with a fancy coffee. I spent double what I usually spend on lunches out and I’m not even sorry. It was almost as good as a spa day.

I really wanted to love Imagine festival as the programme looked wonderful but our experience was disappointing. Of course, this was just one day out of a two-week festival so probably not representative. Southbank Centre is a brilliant venue for families, but I’d be a bit wary of attending any Imagine festival events in future. I just can’t handle the crowds and it turns out neither can my kid.

Imagine Festival takes place each February at Southbank Centre, London SE1. Some events are ticketed, some free so check the programme for details. There’s baby changing, lift access, bookshops and several cafe/bars throughout the building.

One thought on “Imagine Festival at Southbank Centre”

Ramblings on Books, Music and Films

Find your tribe to support and empower you.

Come Here To Me!

The ambitious tales of a mother with a travel addiction

Mom Life and Me

Adventures getting out and about with a baby

Appear highbrow without trying by reading...

The everyday normality of life with a baby